Meconi’s Tacoma Pub & Eatery opened to the public on April 2, 2004. Local customers quickly dropped “Tacoma” from the name and we became known as Meconi’s Pub & Eatery or just simply Meconi’s.

In 2018 we began the process of putting “Tacoma” back into our name and emphasizing our special function as downtown Tacoma’s foremost local pub — a true public house — a gathering place for locals and visitors alike. Welcome to Meconi’s Tacoma Pub! 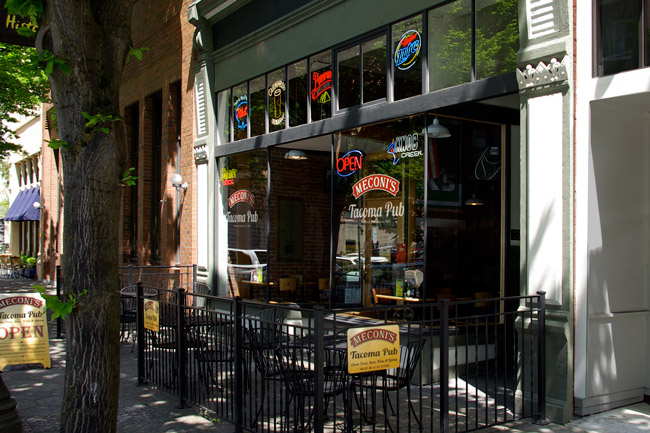 We’re known for our casual atmosphere where friends can enjoy good food and drinks together. We’re also known as one of those places where you don’t stay a stranger for too long — no one sits alone at our bar for any length of time without meeting new friends.

Meconi’s Tacoma Pub is the perfect meeting place for those going out on the town. The Pantages and Rialto Theaters are nearby, as well as Theatre on the Square. The Mansion on Broadway events center and the Temple Theater and Ballroom are only a few blocks away.

The free light rail link (a block over on Commerce Street) connects Meconi’s to the Greater Tacoma Convention & Trade Center, Hotel Murano, Courtyard by Marriott, and the Holiday Inn Express & Suites, as well as the Tacoma Museum District, University of Washington Tacoma, LeMay Car Museum, and the Tacoma Dome.

During the working day, Meconi’s is a great place for business-type meetings. We have large tables, free wi-fi, and more than just coffee to drink. However, no actual meeting is required, we provide a pleasant escape for many local professionals taking a break from the office.

We have several big-screen HD TVs throughout the pub, but we don’t over do it. We show most of the local teams: Seahawks, Mariners, Sounders, Huskies, Cougs, Zags, and more. 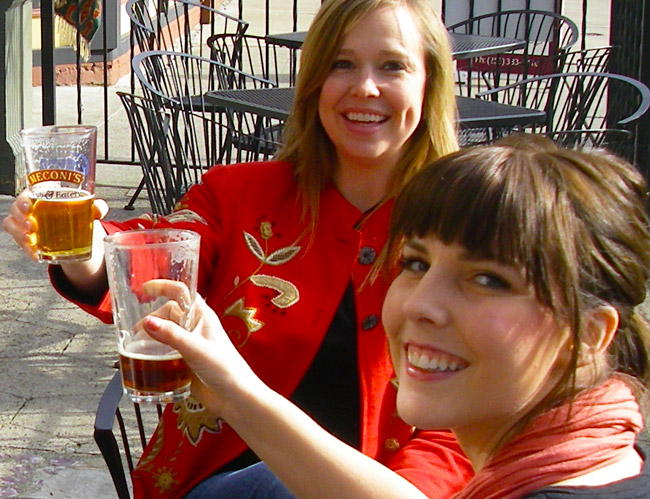 Meconi’s Tacoma Pub features a beer garden up front for our patrons who enjoy the open air. We have table umbrellas for relaxing in the shade and for the off chance it rains in the Pacific Northwest.

Fun in the Back Room

It’s all fun and games until ... well ... it’s always fun and games in our back room featuring a pool table, air hockey, pinball machines, darts, and a very popular video golf machine. We’ll even let you reserve our game room for your own function! (Guests must be 21.)

Meconi’s Tacoma Pub is located in the D. T. Davis/Bodega Bar Building, built in 1889 on the site of a wood-framed structure formerly occupied by Doc “the satin barber” Levin.

According to the Tacoma City Directory for 1891–1892, the first floor of the new building was occupied by the Bodega Bar and The Bodega — a wholesale and retail dealer in wines, liquors, and cigars. On the second and third floors were “Reading Rooms” and “Private Apartments for Gents.”

Tacoma in those days was known as an open-town with lax enforcement of laws concerning liquor, vice, gambling, and such. Initially, the Bodega Bar was no worse than any of the other bar/brothels along “Whiskey Row” between 7th and 9th Streets on Pacific Avenue. That would change.

The Bodega Bar gradually became a seedy saloon during early 1900’s with a so-called disorderly resort upstairs. By 1910, concerned citizens and a new police commissioner began efforts to “clean up” downtown. At midnight on February 15, 1912, one of the last of Tacoma’s original dives, the notorious Bodega Bar, closed its doors for good when its license was not allowed to be renewed.

The forced closing of the Bodega Bar prompted a lawsuit. During the trial it came out that the owner paid $150 a month to rent the building, but was himself paid $250 a month by a woman renting the upstairs for her business. It further came out that a speaking tube and dumbwaiter illegally supplied drinks for her customers upstairs and that sometimes her “girls” worked the back room of the bar.

When the owner was asked “Would you allow your children or any of your family to go into that dive above your saloon?” he answered “No,” and in the end lost the lawsuit.

By the way, a rumor that a blind piano player working upstairs testified that he “didn’t ‘see’ any illegal activity while playing there” is sadly false.

Stories about “Chinese” and “Shanghai” tunnels became popular up and down the West Coast during the 1930’s. In Tacoma, those rumors centered on the bars along Pacific Avenue, including the Bodega Bar ... and sure enough ... we have a tunnel entrance in our basement. It’s boarded up today, but allegedly led down to the harbor below on Commencement Bay.

Were drunken sailors shanghaied from the Bodega Bar? Was contraband smuggled into or out of town through our basement? We’ll never tell. But here is an excellent article on the Tacoma tunnels from SouthSoundTalk and we even get a mention!

On the morning of April 29, 1965, an earthquake registering 6.5 magnitude shook Tacoma for 45 terrifying seconds. Many historic structures in downtown were damaged beyond repair. Several multi-story buildings, including ours, had their upper floors removed due to damage or concern for future earthquakes.

Several businesses occupied the Bodega Bar space before Dave Meconi began renovations in 2003. It was home to Bergh-Griggs Plumbing Contractors for over 40 years, and at various times was occupied by an architect, an interior designer, a printer, and a sign shop.